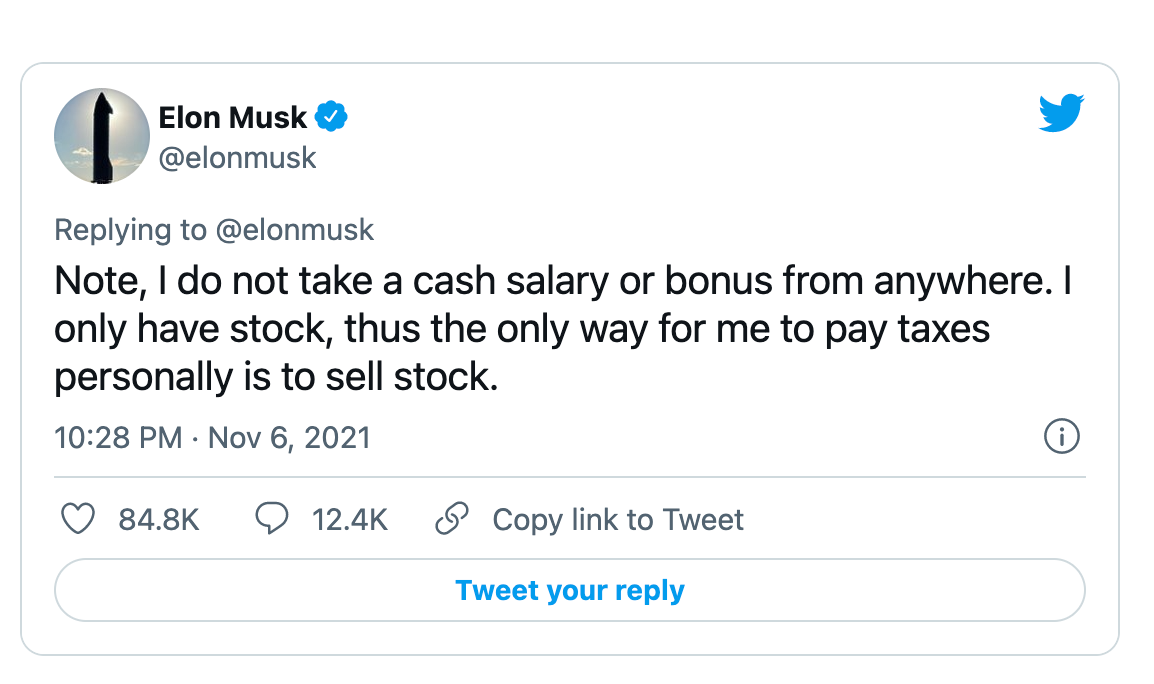 Elon Musk polls his Twitter followers, and a majority votes he should sell 10 percent of his Tesla stock

Tesla CEO and wealthiest person in the world Elon Musk tweeted out a poll Saturday, asking his Twitter followers whether he should sell 10 percent of his stock in the automaker, ostensibly to pay more tax. When the poll closed Sunday afternoon, 57.9 percent of more than 3.5 million participants had voted “yes,” and 42.1 percent voted “no.”

“Much is made lately of unrealized gains being a means of tax avoidance, so I propose selling 10% of my Tesla stock,” Elon Musk tweeted Saturday. He said in a subsequent tweet that he’d abide by the results of the poll “whichever way it goes.”

Musk had been a vocal critic of a proposal to tax unrealized gains on publicly traded assets for some of the wealthiest Americans. Under the proposal by Sen. Ron Wyden (D-Oregon), if assets increased in value, even if the person didn’t sell the assets, the person would have to pay taxes on the unrealized gain. It would basically end the tax loophole that lets billionaires defer capital gains taxes indefinitely, while still being able to borrow against that wealth.

“Eventually, they run out of other people’s money and then they come for you,” Musk tweeted in October, in response to a tweet expressing concerns about the proposal.

Wyden responded to Musk’s idea, tweeting on Saturday: “Whether or not the world’s wealthiest man pays any taxes at all shouldn’t depend on the results of a Twitter poll, It’s time for the Billionaires Income Tax.”

Saturday was also not the first time Musk has floated the idea of selling off some Tesla stock. Musk told journalist Kara Swisher at Code Conference in September that he planned to sell a big chunk of his Tesla stock options before they expired. “I have a bunch of [stock] options that are expiring early next year, so that’s a huge block of options we’ll sell in Q4,” he said.

Swisher asked if he was surprised by how much Tesla’s stock had gone up. “I have gone on record and said I think [Tesla’s] stock price is too high, in my opinion,” Elon Musk added later. “What am I supposed to do? I’m not the one making it go up.”

ProPublica journalist Jesse Eisinger pointed out on Twitter that the third tweet in Musk’s Saturday thread — “Note, I do not take a cash salary or bonus from anywhere. I only have stock, thus the only way for me to pay taxes personally is to sell stock”— appeared to confirm the news site’s reporting on how the ultra-wealthy avoid paying income taxes.

A kanban board is an excellent visualization project management tool that makes it easier to track progress and collaborate. These five kanban board options are ideal to use when managing large projects. The post 5 kanban boards to help you better manage big projects appeared first on TechRepublic.

I’m also crossing my fingers it will the final season. | Photo: Apple Ted Lasso’s upcoming third season is being written as if it’s the final one, Brett Goldstein, who plays the foul-mouthed Roy Kent and writes for the show, told The Sunday Times (via Variety). “We are writing it like that,” he said. “It…

Its gimbal and impressive software put it well ahead of the competition One of the biggest trends in webcams is software that automatically keeps you in frame as you move around. Apple popularized it on the iPad and Studio Display with its Center Stage feature, and even buzzy upstarts like Opal provide it as an…

Doha, October 12 (QNA) – The net profit of Qatar Fuel Company (WOQOD) (a Qatari public shareholding company) grew by 10.4 percent in the first nine months of this year to reach QR 762.849 million, compared to QR 690.800 million in the same period last year. Figures issued by the company, published on Qatar Stock…

Doha, November 08 (QNA) – HE Minister of Sports and Youth Salah bin Ghanem Al Ali inaugurated today the celebration building of the Qatar Racing and Equestrian Club (QREC) in Al Rayyan. The inauguration included a detailed presentation of the building and the facilities and services it will provide to its visitors, including two main…

Doha, Qatar; 12 December 2022 – Mastercard has partnered with My Book Qatar to provide cardholders from across the world access to hundreds of local offers and discounts as part of its Priceless program when they visit Qatar during November and December 2022. Through the collaboration, Mastercard’s international cardholders visiting Qatar will get complimentary access…