wo 19-year-old entrepreneurs, who previously collaborated on a number of projects including a ride-hailing commute app for school kids and left Stanford last year to pursue a new startup, said on Sunday they have raised $60 million to disrupt India’s overcrowded and highly-competitive grocery delivery market.

Zepto, which has largely operated in stealth mode until today and launched its app six months ago, has been the talk of the town for several months. The startup, whose name playfully uses a mathematical term to describe the business, offers a 10-minute grocery delivery service, beating many heavily-backed rivals on speed.

To achieve this feat, Zepto has set up dark stores across the cities where it operates (Mumbai, Bangalore, and as of this week, Delhi.) Palicha said these dark stores, which the startup has set up, are designed and optimized for fast deliveries. (Zepto’s approach, for which Palicha said he looked at other markets and spoke with the operators running those firms, is different from many Indian startups that rely on regular grocery stores for inventory.)

“The way we are growing right now, and the current penetration and frequency of usage we are seeing, the opportunity is just massive,” he said. The startup plans to soon expand to Hyderabad, Pune, and Kolkata and grow the number of dark stores it has to over 100 by early next year, from 40 currently, he said. 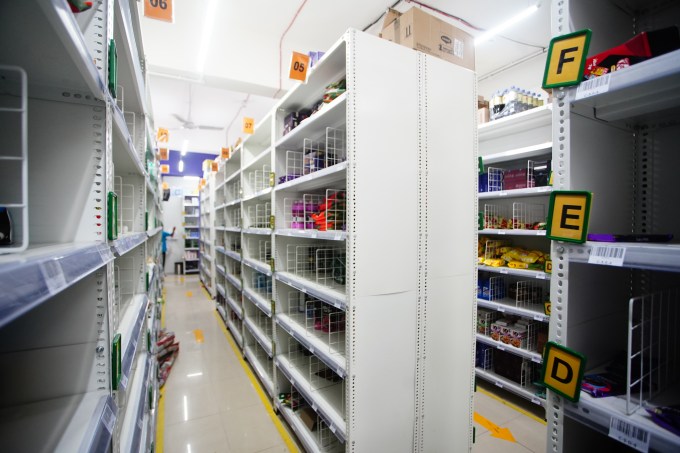 The idea to create Zepto came, said Palicha, when he and Kaivalya Vohra (the other founder) were locked in their houses in Mumbai last year because of the pandemic. “We just had been exposed to the entrepreneurial and tech startup world in a very deep way. Now we were in Mumbai and the biggest problem for the two of us bachelors was securing grocery and essentials,” he said.

Maharashtra — like every other Indian state — had enforced lockdown to contain the spread of the virus, which among other things, meant that deliveries were taking two to three days to reach their customers. “We were extremely frustrated,” he said.

“We felt that the online play of the Indian grocery delivery space, which is one of the world’s largest, was grappling with some gross execution errors,” he added, without naming any firm.

Zepto, which has assembled a team that includes former executives from Flipkart, Uber, Dream11, Pharmeasy, and Pepperfry, competes with a number of heavily-backed startups including SoftBank-backed Swiggy and Grofers, and Google-backed Dunzo, many of which have expanded to the fast grocery delivery category in recent quarters.

“We’ve been ignoring the noise and executing heads- down for a long time to perfect this model, and our efforts are paying off. Today, we’re consistently growing 200% every single month with an unstoppable team, robust product infrastructure, and deep access to institutional capital,” said Palicha.

At stake is an opportunity that is estimated to be worth $21 billion by 2025, according to a recent note prepared by Sanford C. Bernstein analysts. “Online grocery penetration is expected to reach ~3-5%, by 2025 from less than 1% today. Long-term structural drivers remain strong: rising income and affluence, lower tier consumption, e- commerce penetration (~30% CAGR) and a young population (~50% below 25). Grocery spend as a proportion of income remains high at ~ 30%,” they wrote in the note.

The logo of the cryptocurrency Bitcoin is seen on a symbolic “Bitcoin coin” | Photo by Silas Stein / Picture Alliance via Getty Images Bitcoin miners in New York state faced a regulatory blow today as the state denied air permits for a gas-fired power plant used to mine Bitcoin. It’s the latest step that…

Hyundai Ioniq 6 on stage at the LA Auto Show’s press and trade event AutoMobility. | Image: Hyundai Hyundai’s Ioniq 6 electric sedan made its official stateside debut at the Los Angeles Auto Show this week, revealing some new details on the US version. The Magic Mouse-shaped “streamliner” car that was first unveiled this summer…

Brasilia, October 24 (QNA) – The runner-up Internacional and Curitiba played out a 0-0 draw in the 33rd week of the Brazilian Serie A. Vitor Eduardo scored Internacional’s goal in the 60th minute, and Luciano Castan scored for Curitiba in the 24th minute. The result leaves Internacional second in the 20-team standings with 61 points….

Jack Wallen dons his mysterious prognostication cap and predicts how the upcoming year will unfold for Android.